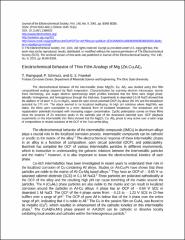 The electrochemical behavior of the intermetallic phase Mg(Zn, Cu, Al)2 was studied using thin film compositional analogs prepared by flash evaporation. Characterization by scanning electron microscopy, atomic force microscopy, and Auger electron spectroscopy depth profiles indicated that the films were single phase, laterally homogeneous, and homogeneous through the thickness. Experiments in deaerated 0.5 M NaCl showed that the addition of 18 atom % Cu to MgZn2 raised the open circuit potential (OCP) by about 150 mV and the breakdown potential by 170 mV. The attack seemed to be localized dealloying. In high pH solutions where Mg(OH)2 was stable, the films were susceptible to a more classical form of localized breakdown. The breakdown and the repassivation potentials increased with increasing copper concentration. Cyclic polarization curves on these films show the presence of Zn reduction peaks in the cathodic part of the downward potential scan. OCP playback experiments on the intermetallic thin films showed that the Mg(Zn, Cu, Al)2 phase is very active over a wide range of compositions in neutral solutions at the OCP of the 7xxx series alloy.