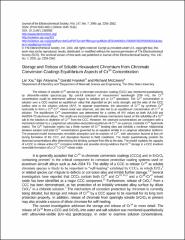 The release of soluble CrVI species by a chromate conversion coating (CCC) was monitored quantitatively by ultraviolet-visible spectroscopy. By careful selection of measurement wavelength (339 nm), the CrVI concentration could be determined without regard to solution pH or CrVI speciation. The CrVI concentration in solution over a CCC reached an equilibrium value that depended on pH, ionic strength, and the ratio of the CCC surface area to the solution volume (A/V). In separate experiments, the adsorption of CrVI by synthetic CrIII hydroxide to form a CrIII-CrVI mixed oxide was observed, and also led to an equilibrium concentration of CrVI in solution. The equilibrium CrVI concentration was determined for a variety of A/V values on both AA1100 and AA2024-T3 aluminum alloys. The results are inconsistent with release mechanisms based on the solubility of a CrVI salt in the solution or depletion of CrVI from the CCC. However, the observed concentrations are consistent with a mechanism similar to a Langmuirian adsorption-desorption equilibrum of CrVI on a porous, insoluble CrIII hydroxide matrix. The CrIII hydroxide matrix has a finite number of CrVI binding sites and exhibits a nonlinear relationship between solution and solid CrVI concentrations governed by an equation similar to a Langmuir adsorption isotherm. The proposed model incorporates reversible adsorption and de-sorption of CrVI, with adsorption favored at low pH during formation of the CCC, and desorption favored in field conditions. The model quantitatively predicts the observed concentrations after determining the binding constant from fits to the data. The model explains the capacity of a CCC to release active CrVI corrosion inhibitor and provides strong evidence that CrVI storage in a CCC involves reversible formation of a CrVI-O-CrIII mixed oxide.