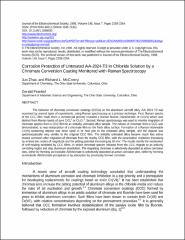 The behavior of chromate conversion coatings (CCCs) on the aluminum aircraft alloy AA 2024-T3 was examined by several types of experiments, using Raman spectroscopy as a primary technique. First, Raman spectra of the CCC film made from a commercial process revealed a Raman feature characteristic of Cr(VI) which was distinct from Raman bands of pure CrO4^−2 or Cr2O7^−2. Second, Raman spectroscopy was used to monitor migration of chromate species from a CCC film to an initially untreated alloy sample. The release of chromate from a CCC was demonstrated, as was redeposition of a chromate film on the fresh alloy surface. Formation of a Raman-observable Cr(VI)-containing deposit was more rapid in or near pits in the untreated alloy sample, and the deposit was spectroscopically very similar to the original CCC film. The initially untreated alloy became much less active toward corrosion after migration of chromate from the nearby CCC film, with the polarization resistance increasing by at least two orders of magnitude and the pitting potential increasing by 60 mV. The results clarify the mechanism of self-healing exhibited by CCC films, in which chromate species released from the CCC migrate to an actively corroding region and stop aluminum dissolution. The migrating chromate is selectively deposited at active corrosion sites, either by forming an insoluble Al/chromate is selectively deposited at active corrosion sites, either by forming an insoluble Al/chromate precipitate or by adsorption by previously formed corrosion.