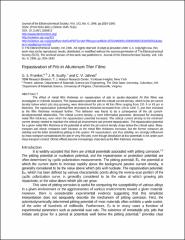 J.R.S. was supported by the NASA-Langley Research Center La^2ST Program and the NSF under DMR-9357463.