Russia Constructed: the Practice of Avant-gardism in Taisho-era Japan, 1912-1926 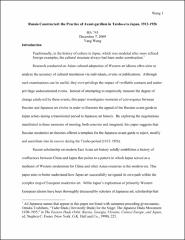 While Japan's artistic and cultural exchanges with Western Europe, especially France, have been thoroughly vetted, such a dialogue with Eastern Europe, especially Russia, deserves more scholarly attention. The geographical proximity of the two nations points to a rich and sustained history of exchange, but a comprehensive study of the Russo-Japanese exchange from an art-historical perspective remains to be undertaken. This void in scholarship testifies to the weight of political history in shaping art-historical discourse. Because Japan after World War II aligned itself with nations of the Western sphere, its cultural ties to Russia have been neglected. An examination of the Japanese art world in the early twentieth century reveals that Russian modernist practices significantly affected the development of the Japanese avant-garde through numerous points of contact, both brief and sustained, from the 1910s to the 1930s.