Copper Corrosion With and Without Inhibitors 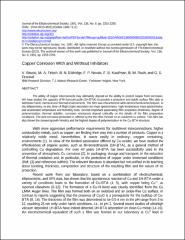 The utility of copper interconnects may ultimately depend on the ability to protect copper from corrosion. We have studied the capacity of lH-benzotriazole (1H-BTA) to provide a protective and stable surface film able to withstand harsh chemical and thermal environments. The film was characterized with electrochemical techniques, in situ ellipsometry, ex situ time-of-flight static secondary ion mass spectrometry, high-temperature mass spectrometry, and accelerated temperature and humidity tests. Several important passivating film properties (thickness, degree of polymerization, thermal stability, corrosion resistance) depend critically on the details of the film preparation conditions. The best corrosion protection is offered by the thin film formed on an oxidized Cu surface. This film has also shown the slowest growth kinetics and the highest degree of polymerization in the Cu-BTA structure.