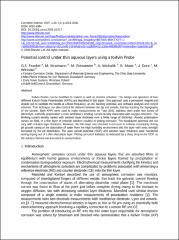 Kelvin Probes can be modified to control as well as monitor potential. The design and operation of two different Kelvin Probe Potentiostats (KPPs) are described in this paper. One approach uses a permanent magnet and double coil to oscillate the needle at a fixed frequency, an AC backing potential, and software analysis and control schemes. This technique can also control the distance between the tip and sample, thereby tracking the topography of the sample. Both KPPs were used to make measurements on Type 304L stainless steel under thin layers of electrolyte. Cathodic polarization curves exhibited a limiting current density associated with oxygen reduction. The limiting current density varied with solution layer thickness over a finite range of thickness. Anodic polarization curves on 304L in a thin layer of chloride solution resulted in pitting corrosion. The breakdown potential did not vary with solution layer thickness. However, the thin layer was observed to increase in volume remarkably during pit growth owing to the absorption of water from the high humidity environment into the layer with ionic strength increased by the pit dissolution. The open circuit potential (OCP) and solution layer thickness were monitored during drying out of a thin electrolyte layer. Pitting corrosion initiated, as indicated by a sharp drop in the OCP, as the solution thinned and increased in concentration.

This work was supported in part by the Office of Science and Technology and International (OST&I), Office of Civilian Radioactive Waste Management (OCRWM), US Department of Energy (DOE). The work is carried out as part of the DOE Multi-University Corrosion Cooperative under Cooperative Agreement DE-FC28-04RW12252.