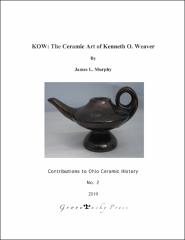 Contributions to Ohio Ceramic History. No. 2

Ceramic art produced by Kenneth O. Weaver (1896-1966) while employed by the U.S. Ceramic Tile Co. of Canton, Ohio, with plant in East Sparta, Ohio, is described and illustrated. The potter utilized heavy red clay used by the tile company along with his own glazes. His work shows considerable sophistication for someone without formal training in ceramics. The pieces were invariably incised with his initials and the year of manufacture, dating from 1929 to 1943. As the ware was produced in his spare time and was not sold commercially, examples are comparatively uncommon.