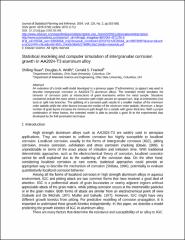 An extension of a brick wall model developed in a previous paper (Technometrics, to appear) was used to describe intergranular corrosion in AA2024-T3 aluminum alloys. The extended model simulates the behavior of corrosion paths at intersections of grain boundaries within the metal sample. Situations considered include the cases where a corrosion path might assume an upward turn, skip an intersection (not turn) or split into branches. The splitting of a corrosion path results in a smaller median of the minimum order statistic while the other factors increase the median of the minimum order statistic. Moreover, a larger number of grain layers increases the minimum path length for a sample with given thickness. With a proper combination of these factors, the extended model is able to provide a good fit to the experimental data developed by the foil penetration technique.

S. Ruan and D.A. Wolfe were supported by the National Science Foundation under Award Number DMS-9802358. G.S. Frankel was supported by the United States Air Force through a grant from S& K Technologies.