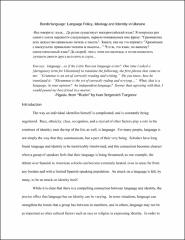 Language and identity are inextricably intertwined, and language policy directly impacts people's lives for more than just communication. In Ukraine, after nearly a century of widely varying linguistic policies and customs, Ukrainian was declared the sole official language in 1991. Almost two decades later, language issues remain critical in politics, perhaps because of the link between language and identity, and complicated by linguistic ideology. In part because of its early history, Ukrainian had been perceived by many as only suitable for village use and regarded as substandard. However, Ukrainian is now the only official language of education and government. This transition has been difficult for some, particularly those who may feel that their identity as Russian-speakers is being attacked; in many parts of Ukraine, negative stereotypes about Ukrainian and its speakers remain. At the same time, a strong connection has been forged between the Ukrainian language, Ukrainian culture, and national pride, and attitudes toward Ukrainian by Russian speakers are changing. Preliminary online research showed that underlying negative attitudes towards Ukrainian permeate many circles, and this paper looks at the results of surveys and interviews conducted by the author in Simferopol, Kherson, Kyiv, and Kharkiv, Ukraine, to tease out stereotypes, examine speaker correlations, and better understand the changing situation. Specifically, data is analyzed for types of stereotypes that persist, and how these stereotypes play across age and geographical region. Motivations for such stereotypes are explored, and connections between language policy, identity, language ideology, and language attitudes are sought out. Determining how, why, and for whom the linguistic transition is the most difficult helps to shed light on what factors influence successful language policy implementation, as well as how language ideology affects the lives of Ukrainians today.