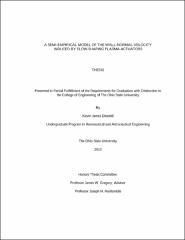 Flow control devices are employed in aerodynamic applications to increase fluid momentum near the surface of a body moving through air. Flow-shaping plasma actuators are one example of a flow control device, and are aptly named for the spatial flow forcing achieved by a distribution of induced jets whose shape resembles the geometry of the electrodes which comprise the actuator. While much prior work has strived to model two-dimensional velocity profiles of single dielectric-barrier discharge actuators, the present study is aimed at the development of a semi-empirical framework to describe the induced jet velocity distribution for inherently three-dimensional configurations such as flow-shaping plasma actuators. The philosophy of the proposed model mirrors the underlying design principle for flow-shaping actuators – that the buried electrode geometry modulates the induced wall-normal velocity profile by limiting the extent of plasma formation. Approximations of potential flow and negligible end-effects are invoked. In the model, a single cross-section of the induced velocity profile is empirically acquired at the location of maximum interacting plasma volume and then modulated by a Fourier series expression of the lengthwise buried electrode geometry to produce the wall-normal velocity distribution. To validate this hypothesis, a buried electrode of square-wave geometry with length of 18-cm and spatial wavelength of 6-cm served as the test article. Experimental velocity data obtained with a pitot tube were compared to the spatial model and correlate well for a first-order engineering approximation. It was also shown that the maximum induced velocity data follow a periodic distribution for the given square-wave electrode geometry. In a practical sense, the proposed model demonstrates a significant step toward simulating the fluid dynamics of flow-shaping actuators without the need to model the complex electromagnetic effects associated with their operation.