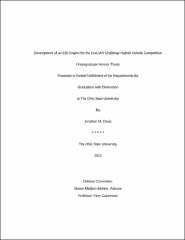 The EcoCAR challenge is a three year competition amongst 16 universities in which teams are to re-engineer a 2009 General Motors crossover vehicle to reduce petroleum consumption, greenhouse gases and regulated emissions while increasing fuel economy. Ohio State‟s EcoCAR team is using a high compression ratio (12.5:1) 1.8L Honda engine designed for compressed natural gas (CNG). The engine has been converted to operate on cellulosic E85 (85% ethanol, 15% regular gasoline) which is a largely renewable fuel and reduces petroleum consumption significantly even when compared to corn-based E85. High compression ratios create thermal efficiency gains 10% higher than a conventional gasoline engine, resulting in higher fuel economy. However, in order to realize these benefits a new engine control algorithm must be developed. The purpose of this research is the development of two engine control maps to be used in the new engine controller. A spark timing map was created to optimize fuel economy. Secondly, a volumetric efficiency map was created to improve transient emissions. These maps are an integral part of the control system of an advanced alternative fuel engine. A new engine wiring harness design was completed to implement the new engine controller and fit with the EcoCAR vehicle design. The results were obtained through engine dynamometer tests consisting of a 189 point matrix of engine speed and manifold pressure (MAP) conditions. A maximum brake efficiency of 40.74% was obtained. Volumetric efficiency ii maps used in engine controller mass air flow calculations presented good agreement with lab measurements. The creation of these two maps have allowed for the use of a high efficiency advanced alternative fuel engine in conjunction with the Ohio State EcoCAR team‟s advanced hybrid crossover vehicle.