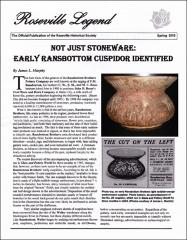 A 1903 advertisement for the Ransbottom Brothers Co., a Roseville, Ohio, pottery later known as Robinson-Ransbottom, illustrates a previously unidentified earthenware cuspidor with distinctive oak leaf motif. Similar cuspidors were made by several potteries in the Zanesville area, including Weller and Owens, but are never marked and therefore can be identified only in rare instances where they have been illustrated.