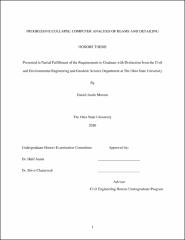 The term 'progressive collapse' can be simply defined as the ultimate failure or proportionately large failure of a portion of a structure due to the spread of a local failure from element to element throughout the structure. Progressive collapse can be triggered by manmade, natural, intentional, or unintentional causes. Fires, explosions, earthquakes, or anything else causing large amounts of stress and the failure of a structure's support elements can lead to a progressive collapse failure. Progressive collapse is a complicated dynamic process where the collapsing system redistributes the loads in order to prevent the loss of critical structural members. For this reason beams, columns, and frame connections must be designed in a way to handle the potential redistribution of large loads. Some of the more famous examples of progressive collapse phenomena include the collapse of the World Trade Center towers due to terrorist attack, the bombing of the Murrah Federal Building in Oklahoma City, and the collapse of the Ronan Point building due to a gas explosion. Through research being done, such as that in this study, progressive collapse can be better prepared for and possibly prevented in the future. This project involves use of two main computer programs to perform analysis on a reinforced concrete structure. MATLAB and SAP2000 are used to determine the total amount of steel rebar required to prevent progressive collapse at midspan of a continuous beam section where a column loss has occurred. The research results provide insight into the minimum amount of reinforcing steel actually needed to achieve a demand to capacity ratio of approximately 1.0 and prevent collapse in the event of a single column loss. Several relationships are developed between span lengths, distributed loading, column loading, and steel required. The maximum allowable loads are calculated to show how to best prevent progressive collapse. The results are obtained using different models where combinations of pinned end and fixed end support configurations are used along with analysis of nominal moment strength of the beam versus the plastic moment strength of the beam. Ultimately, tables and graphs are developed that could eventually be used in design codes where there are currently very limited or no specific rules or guidelines directed towards prevention of progressive collapse.