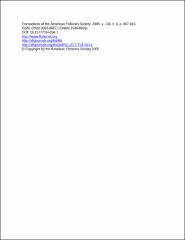 Bunnell, David B.
Scantland, Matthew A.
Stein, Roy A.

Bunnell, David B.; Scantland, Matthew A.; Stein, Roy A. "Testing for Evidence of Maternal Effects among Individuals and Populations of White Crappie," Transactions of the American Fisheries Society, v. 134, no. 3, 2005, pp. 607-619.

For an increasing number of species, maternal characteristics have been correlated with the characteristics of their eggs or larvae at the individual level. Documenting these maternal effects at the population level, however, is uncommon. For white crappies Pomoxis annularis, we evaluated whether individual maternal effects on eggs existed and then explored whether incorporating maternal effects explained additional variation in recruitment, a population-level response. Individual egg quality (measured as ovary energy density) increased with maternal length among individuals from seven Ohio reservoirs in 1999 and three in 2000. Among these same individuals, egg quality increased with maternal condition factor (measured as residual wet mass for a given length) in 1999 but not in 2000. In 2000 we estimated somatic energy density, an improved measure of condition; egg quality increased with somatic energy density, but somatic energy density was also strongly correlated with maternal length. Hence, we could not determine whether maternal length or condition was the primary factor influencing white crappie egg quality. Across seven populations, the relative population fecundity (i.e., stock size) of the 1999 year-class was unable to explain the variation in recruitment to age 2 (Ricker model r^2 = 0.04 and Beverton and Holt model r^2 = 0.02). Mean ovary energy density (i.e., egg quality), however, was unable to explain additional recruitment variability in either model. Hence, we documented evidence of maternal effects on individual ovaries but not on population-level recruitment. Nonetheless, we recommend that future studies seeking to understand white crappie recruitment continue to consider maternal effects as a potential factor, especially those studies that may have greater sample sizes at the population level and, in turn, a greater probability of documenting a population-level effect.

This research was funded by Federal Aid in Sport Fish Restoration Project F-69-P, administered jointly by U.S. Fish and Wildlife Service and Ohio Department of Natural Resources, Division of Wildlife and the Department of Evolution, Ecology, and Organismal Biology at Ohio State University.