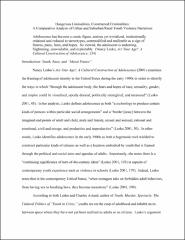 Throughout the 1990s in the United States, a series of suburban school shootings perpetrated by young, white males disrupted contemporary perceptions of American youth, often a population configured in terms of ideal whiteness. While scholars from a variety of disciplines have expressed an interest in the ways in which the media portrays real life violence and offered critiques of portrayals of race and gender as homogenously white and male, there is scant analysis of fictional accounts of school shootings and school violence despite the increasing availability of these narratives across broad audiences. Following the numerous school shootings throughout the 1990s, several films, adult and young adult novels, television episodes, memoirs, and a variety of non-fiction texts emerged as forms of social commentary on school violence. Each of these representations focuses on adolescent protagonists who experience or perpetrate school violence in suburban or rural settings (i.e. primarily white locations). The central research question of this paper asks: if the media have a specific role and purpose in sensationalizing crime and violence, what then is the specific role and purpose of the fictional narratives that also emerge in response to the social and political anxieties concerning white youth violence? The very presence of these fictional representations suggests the question of their cultural work and what their portrayals signify as a grouping of narratives. Despite the decreasing numbers of homicides perpetrated by youth and committed against youth on school grounds in the last two decades, popular cultural portrayals of youth violence in schools have increased exponentially during this time. Interestingly, previous to the year 2000, the majority of school violence novels, films, and television representations featured youth of color in narratives that focused on gang violence and encouraged the pursuit of education to escape dangerous neighborhoods. Post-2000, however, there has been a rise in "rampage" shooting representations with numerous novels, television episodes, films, and young adult novels portraying white males shooting classmates and teachers in suburban and rural areas. These post-2000 representations continue through the present with the most recent being a 2009 film, April Showers, written and directed by Andrew Robinson, a survivor of the Columbine High School Massacre. In these fictional portrayals of youth violence, male perpetrators are frequently characterized in connection to their racial identities, resulting in racially disparate narratives that frame youth of color as engaging in a "culture of violence" that is both inevitable and directly tied to their race and community, whereas white youth perpetrators are labeled as "evil" or as psychologically disturbed and are thus disconnected from their race and set apart from their communities. While urban violence is assumed to be endemic and can thus only be eradicated through incarceration, the importance of explaining away white youth violence is central to the anxieties that proliferate in response to rampage school violence. I argue in this paper that these representations have direct implications for the ways in which youth are either characterized as American citizens or denied a citizenship identity based on their actions and the actions of those around them; these narratives communicate particular messages regarding who is a threat to democracy and who can be educated to be a harmless and productive citizen. To further contextualize the similarities and differences between these racially segregated sub-genres of education narratives that focus on youth violence, in this paper I offer a short literature review of the scholarship surrounding popular culture representations of minority youth in urban settings in order to contextualize post-2000 white youth violence narratives within already present narratives of youth violence. Following this discussion, I propose a comparative taxonomy of urban and suburban/rural education representations as a tool to categorize youth violence narratives as well as attempt to understand these narrative sub-genres as historically, politically, and socially embedded. I then utilize this taxonomy to categorize over 50 youth violence narratives ranging from 1955-2009. I conclude my paper with an application of this taxonomy that places two representative film narratives, the urban school violence film, 187 (1997), and the suburban/rural school violence film Elephant (2003), in conversation with one another through an analysis of the films themselves in addition to in-depth reception studies. Scholars have claimed that narratives of adolescence engage adult audiences specifically through their messages about the future of society, but the repeated portrayals of deviant youth in narratives of school violence imply an inability to understand where youth belong in larger society. The narratives in my study illustrate that when white crime occurs among youth through violence, the innocence of youth and whiteness are both called into question, bringing about what scholars across disciplines have described as a "moral panic." A cultural paranoia grows out of rampage shootings, in part, because the potential victimhood that whites fear within urban areas has transitioned to white schools and suburban settings. Indeed, the moral panic that results from rampage violence in white, suburban and rural areas can find its foundation in the cultural and political anxieties surrounding perceptions of urban juvenile crime in the 1980s and 1990s. In order to offer reassurance to white audiences, fictional narratives of youth violence that reference real-life violent acts must provide justifications and explanations for white violence that is framed as unexpected and shocking. Thus, those who can reframe and explain rampage violence perpetrated by white youth hold the power of reclaiming the innocence of youth, whiteness, and, most importantly, white youth.