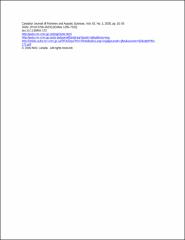 This research was funded by the US Environmental Protection Agency Great Lakes National Program Office, the Ontario Ministry of Natural Resources, and the Aquatic Ecology Laboratory at Ohio State University.