Food Consumption and Growth of Three Esocids: Field Tests of a Bioenergetic Model 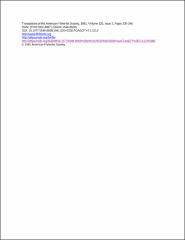 We quantified diet and compared field estimates of growth and daily ration with predictions from a bioenergetic model for young-of-year muskellunge Esox masquinongy, northern pike E. lucius. and tiger muskellunge E. masquinongy x E. lucius introduced into five Ohio reservoirs. Gizzard shad Dorosoma cepedianum dominated esocid diets (77-97% by weight) through autumn but were absent by spring. Diets in late autumn and spring included sunfishes Lepomis spp. and brook silversides Labidesthes sicculus. Northern pike and tiger muskellunge grew faster than muskellunge through the first year. Food consumption was highest for tiger muskellunge, followed by northern pike, then muskellunge. Growth rates and rations were highest immediately after stocking, declining through autumn to their lowest levels in December and spring. A bioenergetic model underestimated final mass by a factor of two to three for all esocids; predictions for food consumption were better than those for growth but still overestimated observed values by 39-52%. Neither behavioral thermoregulation nor incorporation of seasonal energetic content of prey altered predictions (maximum of 2% increase). In contrast, adjustments in metabolic rates to account for differences in season and temperature substantially improved model predictions. Size-selective mortality did not account for the inaccuracies in model predictions. Conversion efficiencies (39-63%) exceeded those previously measured for esocids fed maximum rations, suggesting that model variables should be determined for a range of ration levels. Though used extensively, the predictions of bioenergetic models should not be accepted until the models have been subjected to additional field verification.

This study was supported in part by funds from the Federal Aid in Fish Restoration Act under Project F-57-R.