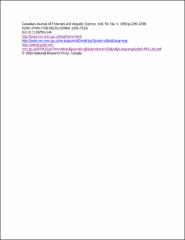 Relative abundance of the total prey fish community in the western basin of Lake Erie varied little from 1969 to 1988, but species composition changed significantly. Soft-rayed fishes such as emerald shiner, Notropis atherinoides, spottail shiner, N. hudsonius, and alewife, Alosa pseudoharengus, declined significantly after 1977 whereas only one spiny-rayed species, white bass, Morone chrysops, declined over the same period. Trout-perch, Percopsis omiscomaycus, a relatively abundant species rarely eaten by piscivores in this system, experienced only minor shifts in abundance between 1969 and 1988. Although several factors could be responsible for the shift in species composition, predation by increasingly abundant walleye, Stizostedion vitreum, played a major role. Walleye prefer to eat soft-rayed fishes; thus, observed shifts in the community match expectations of selection noted in the diet. We suggest that management goals focusing primarily on walleye affected not only the targeted species but the entire fish community of western Lake Erie.