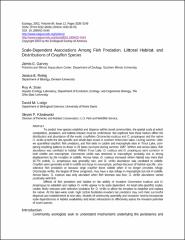 To predict how species establish and disperse within novel communities, the spatial scale at which competition, predation, and habitat interact must be understood. We explored how these factors affect the distribution and abundance of the exotic crayfishes Orconectes rusticus and O. propinquus and the native O. virilis at both the site-specific and whole-lake scales in northern Wisconsin lakes. During summer 1990, we quantified crayfish, fish predators, and fish diets in cobble and macrophyte sites in Trout Lake, comparing resulting patterns to those in 21 lakes surveyed during summer 1987. Within and across lakes, fish abundance was unrelated to habitat. Within Trout Lake, O. rusticus and O. propinquus were common in both cobble and macrophyte. Orconectes virilis was restricted to macrophyte, probably due to strong displacement by the invaders in cobble. Across lakes, O. rusticus increased where habitat was more than 16.7% cobble, O. propinquus was generally rare, and O. virilis abundance was unrelated to cobble. Crayfish were generally small in cobble and large in macrophyte, perhaps because of habitat-specific, size-selective fish predation or because large crayfish leave cobble when it no longer provides refuge. Orconectes virilis, the largest of three congeners, may have a size refuge in macrophyte but not in cobble. Across lakes, O. rusticus was only abundant when fish biomass was low; O. virilis abundance varied positively with fish. Effects of fish predation and habitat on the ability of invaders Orconectes rusticus and O. propinquus to establish and replace O. virilis appear to be scale dependent. At local (site-specific) scales, cobble likely interacts with selective predation for O. virilis to allow the invaders to establish and replace the native. At the lake-wide scale, high cobble facilitates invaders but predation may curb their successful dispersal and establishment at new sites. Models of community assembly and invasions need to incorporate scale dependencies in habitat availability and biotic interactions to effectively assess the invasion potential of novel species.

A portion of this research was supported through an REU supplement to NSF grants BSR 85-00775 and BSR 89-07691 in collaboration with Ken Brown and Alan Covich.