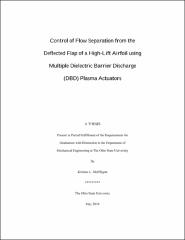 In current wing design, multiple flaps are incorporated into the trailing edge to allow mixing of high and low pressure sides to reduce flow separation. These flaps reduce the efficiency by adding weight and complexity to the aircraft. A single hinged flap would reduce these inefficiencies but is more susceptible to flow separation. Active flow control is a means by which the fluid flow over a body is deliberately altered and can be altered such that it becomes less likely to separate from the object. By energizing the flow, the degree of separation of the flow can be controlled, and this inherently controls lift. Dielectric barrier discharge (DBD) plasma actuators are a form of active flow control. These actuators are created by asymmetrically aligning two electrodes and adding a dielectric layer between the electrodes. When the electrodes are electrically connected, ionized air (plasma) travels from the exposed electrode towards the covered electrode. Collisions occur between the plasma and neutral air over the body, and momentum is transferred to the neutral air, effectively energizing it. The purpose of this study is to examine the lift enhancement and flow control authority that multiple DBD plasma actuators have on a high-lift airfoil when compared to the flow exhibited by non-controlled and single DBD plasma actuator controlled cases. Electrodes were mounted onto a simplified NASA Energy Efficient Transport airfoil near the flap. The airfoil was tested in a closed, recirculating wind tunnel operating at a Reynolds number of 240,000, 20° flap deflection angle and 0° degree angle of incidence. The actuators were independently powered in order to determine the most effective input parameters. Using multiple actuators operated in-phase has increased the lift and has delayed flow separation on the trailing edge flap when compared to baseline and single actuation cases.