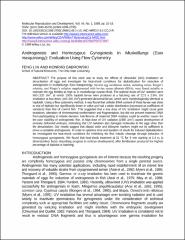 The purpose of this work was to study the effects of ultraviolet (UV) irradiation on denucleation of eggs and investigate the heat-shock conditions for diploidization for induction of androgenesis in muskellunge, Esox masquinongy. Several egg incubation media, including saline, Ringer’s solution, and Ringer’s solution supplemented with bovine serum albumin (BSA), were found suitable to maintain the egg fertility as high as in muskellunge ovarian fluid. The optimal doses of UV radiation were 660-1320 J/m^2, at which 100% haploid larvae were produced at a hatching rate of 22.5 ± 2.8%. UV irradiation at low doses (165-330 J/m^2) generated abnormal larvae, which were morphologically identical to haploids. Using a flow cytometry method, it was found that cellular DNA content of these larvae was close to that of diploids but significantly lower in value and had a wider distribution (expressed as coefficient of variation) than that of control fish. This suggested that a low dose of UV irradiation might cause gene mutations, alteration of chromosomal conformation and fragmentation, but did not prevent maternal DNA from participating in mitotic division. Interference of maternal DNA residues could be another reason for the poor viability of androgenetic fish. A high dose of UV radiation (1980 J/m^2) caused development of severely deformed embryos, indicating that UV radiation also damaged molecules in the eggs other than the denucleation. Our results suggest that classic color and allozyme markers might not be sufficient to prove a complete androgenesis. In order to optimize time and duration of shock for induced diploidization, we investigated the heat-shock conditions for inhibiting the first mitotic cleavage through induction of homozygous gynogenesis. We found that heat-shock treatment at 31 °C for 9 min starting at 1.4 τ0 (a dimensionless factor describing progress in embryo development) after fertilization produced the highest percentage of diploids at hatching.

This work was funded by the Federal Aid in Sport Fish Restoration Program (F-69-P, Fish Management in Ohio) administered jointly by the United States Fish and Wildlife Service and the Ohio Division of Wildlife.