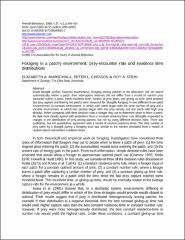 Small bluegill sunfish, Lepomis macrochirus, foraging among patches in the laboratory did not search systematically within a patch; their intercapture intervals did not differ from a model of random prey encounter within a patch. Patch-residence time, number of prey eaten, and giving-up time (time between last prey capture and leaving the patch) were measured for bluegills foraging in two different three-patch 'environments' (a constant environment, in which each patch began with the same number of prey and a variable environment, in which two patches began with low prey density and one patch with high prey density). When compared with three decision rules a forager may use to determine when to leave a patch, the data most closely agreed with predictions from a 'constant residence time' rule. Bluegills responded to changes in the distribution of prey among patches, but not by using different decision rules. There was qualitative, but not quantitative, agreement with a model of random residence times. The total number of prey eaten by a bluegill during a foraging bout was similar to the number predicted from a model of random search and random residence times.