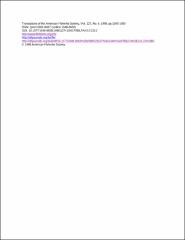 Feeding success during the first weeks of life is critical to determining survival and ultimate year-class strength of fishes. To compare the relative influence of gape limitation and available zooplankton on prey size selection among the larvae of three species of freshwater fishes, we gathered data on fish gape size, prey size, and size-specific prey selection in lakes and reservoirs. These variables were compared among black crappies Pomoxis nigromaculatus from a lake that contained large zooplankton as prey and white crappies P. annularis and gizzard shad Dorosoma cepedianum (a potential competitor of white crappie) from reservoirs that contained small zooplankton. In three Ohio reservoirs (i.e., small-zooplankton systems), available zooplankton and larval stages of white crappies and gizzard shad were collected once per week during April through September 1987 and 1988. Although mean prey size of white crappies continued to increase with fish size, mean prey size of smaller-gaped gizzard shad did not. However, as documented for black crappies in north-temperate lakes, white crappies in reservoirs continued to consume prey that were smaller than other available prey, even when they were no longer gape limited. Thus, although the potential for gape limitation differed between large- and small-zooplankton assemblages, prey selection did not differ as expected. Given between-species prey size selection, gizzard shad (that prefer small zooplankton) should be relatively more successful in reservoirs with small zooplankton, whereas white and black crappies (that prefer large zooplankton) should have better success in lakes with large zooplankton.