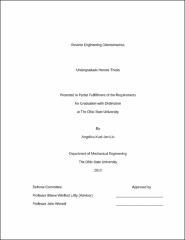 The trap-jaw ant genus Odontomachus possesses the fastest mechanical movement known in nature. These ants are capable of closing their jaws at speeds of over 140 mph. This project, which I will continue for my M.S. in Mechanical Engineering, investigates the structural design of the trap-jaw mechanism from an engineering perspective. To this point, I have primarily focused on the shape of the head cuticle. Entomologists have traditionally treated the head structure as a rigid body, assuming that the potential energy required to close the jaws at such high velocity is stored primarily in the muscles and apodeme. In this project, we include the thin head shell itself in the functional model of the trap jaw mechanism, to determine if Odontomachus could have evolved a distinct head shape that stores potential energy in the deformed shell as well. Three-dimensional computer-aided CAD models of the Odontomachus head structure were developed, with which we developed finite element analyses to determine cuticle deflection and stress concentrations for the Odontomachus head. The same procedures were carried out for three additional head shape iterations. One iteration was based on the ant genus Atta, which has a very different head shape that is optimized for high force generation, rather than high closing speed. It was determined that the Odontomachus head structure has evolved to minimize both stress and deflection, which disproves our hypothesis. Gaining a better understanding of this mechanism will aid entomologists in their study of these ants and may well lead to future engineering innovations in the area of very small scale robotics.