Same Language, Two Worlds: Analysis of Stereotypes among Citizens of Madrid and Ecuadorian Immigrants in Madrid 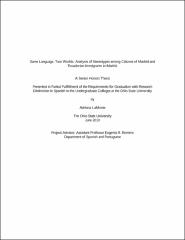 Spain currently claims one of the largest immigrant quotas in Europe; Madrid, its capital city, is one of the country's top destinations. This immigration is a relatively new phenomenon, however, for until the late 1980s, Spain had high rates of outgoing migration (emigration). In the past ten years, large numbers of Latin American immigrants have come to Spain, such as the Ecuadorians that provide the most people from Latin America and the second largest of any immigrant group in Spain. Yet despite sharing a common language, Spanish, there is a marked separation between these immigrants and Spanish citizens. In May and June of 2009, I conducted two separate surveys - one with Ecuadorian immigrants in Madrid, the other with native Madrid citizens - regarding the contact with and perceptions of each other. Using their responses as a base and as an example, this project analyzes the current situations and opinions surrounding Latin American immigration in Madrid. Based on the stereotypes and perceptions portrayed in the data, this project focuses on the existence of three main issues: a need on the part of Spaniards to protect their culture through the phenomenon of "otherness," defining what is Spanish versus what is not; issues of gender in which immigrant women find themselves at an even sharper disadvantage than immigrant males; and the persistence of postcolonial views and roles played by both Latin Americans and Spaniards. To further study this phenomenon, I will also study two examples of fictional literature, the novels Cosmofobia (2007), by Lucía Etxebarria, and Una tarde con campanas (2004), by Carlos Méndez Guédez, to demonstrate the existence of these main issues in Madrid's society today, and to show that, although the two groups speak the same language and live in the same city, they indeed live in two separate worlds.