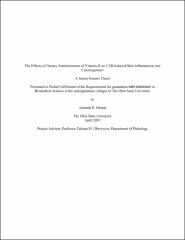 In today's world, many people are deficient in vitamin D. Increased sun exposure acts as a mechanism to increase vitamin D levels, and studies have shown that optimal amounts of vitamin D can reduce the risk of internal cancers. However, the ultraviolet activation spectra for vitamin D photosynthesis, DNA damage and skin cancer are identical. Previous evidence has not revealed whether or not increased vitamin D levels play a protective role against the development of non-melanoma skin cancer. For this reason, we hypothesized that dietary vitamin D may inhibit UVB induced inflammation, a precursor to skin cancer, and tumor formation. In order to test this hypothesis, 150 male and female Skh-1 hairless mice were placed into groups receiving 1 of 3 diets containing 25 IU/g, 150 IU/g or 1000 IU/g vitamin D. In an acute and chronic study, mice were fed vitamin D diets for 4 weeks and were then exposed to one minimal erythemic dose (2240 J/m2) of UVB light and sacrificed 48 hours following exposure or were exposed three times weekly for 25 weeks. Inflammatory parameters including edema formation, myeloperoxidase activity, and skin morphology were examined in the acute study. Immunohistochemical analysis was also performed to detect the presence of cyclobutane pyrimidine dimers and p53. In the chronic study, tumors were measured over time and were graded by a veterinary pathologist at the cessation of the study. Vitamin D appeared to have no effect on inflammation and dose dependently decreased direct DNA damage; however, p53 analysis revealed a possible dose dependent increase in global DNA damage. In the chronic study, male mice exhibited a vitamin D dose dependent increase in tumor size, burden, and grade. Together, these results suggest that dietary vitamin D supplementation may not be a viable option for prevention of cutaneous cancer.