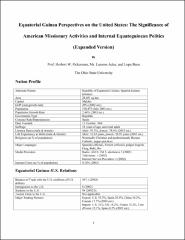 Equatorial Guinea is a small country in western Central Africa, consisting of three physically separate major territories and a number of tiny islands. The major territories are Rio Muni, which is on the continent sandwiched between Cameroon and Gabon, and the insular territories of Bioko (formally Fernando Po) in the Bight of Biafra and Annobon, which is about 357 kilometers off the coast and just south of the equator. The tiny islands are Corisco, Belobi, Mbane, Conga, Cocotiers, and Elobey, all located off the coast of Rio Muni. Equatorial Guinea is the only Spanish-speaking country in Africa. It gained independence from Spain on 12 October 1968. Since independence, the country's politics has been dominated by the Esangui clan, from the Mongomo district on the mainland. Equatorial Guinea is among Africa's top oil-producing nations and for that reason has become a major commercial partner of the United States. This small country, with just over a half-million people, is currently the fourth-largest recipient of U.S. foreign direct investment in sub-Saharan Africa, surpassed only by the much larger countries of Nigeria, South Africa, and Angola.