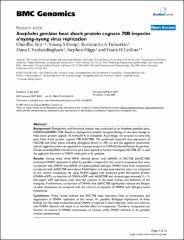 Background Phylogenetic and functional analysis was conducted on an Anopheles gambiae gene, ENSANGG00000017398. Based on phylogenetic analysis, this gene belongs to the same lineage as Heat shock protein cognate 70-4 (Hsc70-4) in Drosophila. Accordingly, we propose to name this gene Heat shock protein cognate 70B (HSC70B). We previously reported that expression of HSC70B and other genes including elongation factor-1α (EF-1α) and the agglutinin attachment subunit (agglutinin) were up-regulated in o'nyong-nyong virus (ONNV)-infected female An. gambiae. Double-stranded RNA interferences have been applied to further investigate HSC70B, EF-1α and the agglutinin functions in ONNV replication in An. gambiae. Results Among these three RNAi silenced genes, only dsRNAs of HSC70B (dsHSC70B) promoted ONNV replication in adult An. gambiae compared to the control mosquitoes that were co-injected with ONNV and dsRNA of β-galactosidase (dsβ-gal). ONNV titers from mosquitoes co-injected with dsHSC70B were about 9-fold higher at 6 days post-injection (d.p.i.) as compared to the control mosquitoes. By using ONNV tagged with enhanced green fluorescent protein (ONNV-eGFP), co-injection of ONNV-eGFP with dsHSC70B also showed approximately 2 ~ 3-fold higher GFP expression rates than the controls in the head, thorax, and abdomen of the mosquito. Furthermore, co-injection of ONNV with dsHSC70B significantly reduced the lifespan of adult mosquitoes as compared with the control, co-injection of ONNV with dsβ-gal treated mosquitoes. Conclusion These results indicate that HSC70B plays important roles in homeostasis and suppression of ONNV replication in the vector, An. gambiae. Biological implications of these findings are that while mosquitoes allow ONNV to replicate in them, they also check viral titers so that ONNV infection will result in no harmful effect on mosquitoes. Therefore, mosquitoes can function as vectors of ONNV transmission to humans while ONNV infection in An. gambiae remains asymptomatic.

We wish to thank Dr. K. E. Olson and B. D. Foy for his kind gift of infectious clone pONNic-Foy. This research would not have been possible without the assistance of Dr. Mabel Berois with helpful guide. This project was supported by grants R01-AI44273 from NIH/NIAID to F.H.C. D.L.V. was supported by NIH T32 A107536