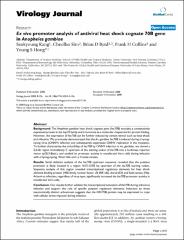 Background The Anopheles gambiae heat shock cognate gene (hsc70B) encodes a constitutively expressed protein in the hsp70 family and it functions as a molecular chaperone for protein folding. However, the expression of hsc70B can be further induced by certain stimuli such as heat shock and infection. We previously demonstrated that the An. gambiae hsc70B is induced during o'nyong-nyong virus (ONNV) infection and subsequently suppresses ONNV replication in the mosquito. To further characterize the inducibility of hsc70B by ONNV infection in An. gambiae, we cloned a 2.6-kb region immediately 5' upstream of the starting codon of hsc70B into a luciferase reporter vector (pGL3-Basic), and studied its promoter activity in transfected Vero cells during infection with o'nyong-nyong, West Nile and La Crosse viruses. Results Serial deletion analysis of the hsc70B upstream sequence revealed that the putative promoter is likely located in a region 1615–2150 bp upstream of the hsc70B starting codon. Sequence analysis of this region revealed transcriptional regulatory elements for heat shock element-binding protein (HSE-bind), nuclear factor κB (NF-κB), dorsal (Dl) and fushi-tarazu (Ftz). Arbovirus infection, regardless of virus type, significantly increased the hsc70B promoter activity in transfected Vero cells. Conclusion Our results further validate the transcriptional activation of hsc70B during arbovirus infection and support the role of specific putative regulatory elements. Induction by three taxonomically distinct arboviruses suggests that the HSC70B protein may be expressed to cope with cellular stress imposed during infection.

The authors are grateful to M. Kern of University of Notre Dame for providing BAC clones containing the hsc70B locus. We appreciate Dr. D. Wesson of Tulane University for providing reagents and cell culture facilities and M. Rider of Tulane University for his critical review of the manuscript. This work was supported by the Louisiana Board of Regents Fund (LEQSF(2005-08)-RD-A-35) and Tulane Research Enhancement Fund to YSH.