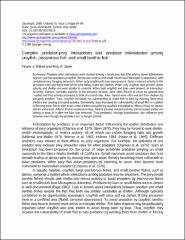 Predator-prey interactions were studied among a small prey fish (the johnny darter Etheostoma nigrum) and two predators (crayfish Orconectes rusticus and small-mouth bass Micropterus dolomieui) with complementary foraging behaviors. When only smallmouth bass were present, darters reduced activity to 6% of control rates and spent most of the time hiding under tile shelters. When only crayfish were present, darter activity and shelter-use were similar to controls. When both crayfish and bass were present, an interaction occurred. Darters, normally inactive in the presence of bass, were often forced to move by approaching crayfish and thus activity increased to 19% of control rates. Also, darters were often evicted from shelters by intruding crayfish. Thus, crayfish increased the vulnerability of small fish to bass by evicting them from shelters and causing increased activity. Conversely, bass increased the vulnerability of small fish to crayfish by forcing these fish to seek cover under shelters occupied by crayfish. Intimidation effects of bass on darters last for some time. After a 30-min exposure to bass, darters showed reduced activity and increased shelter use lasting at least 24 h after the bass was removed. Thus predators, through intimidation, can influence prey behavior even though the predators are no longer present.

This work was made possible through a University Postdoctoral Fellowship to F.J. Rahel funded through the Graduate School of The Ohio State University.