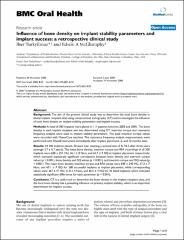 Background The aim of the present clinical study was to determine the local bone density in dental implant recipient sites using computerized tomography (CT) and to investigate the influence of local bone density on implant stability parameters and implant success. Methods A total of 300 implants were placed in 111 patients between 2003 and 2005. The bone density in each implant recipient site was determined using CT. Insertion torque and resonance frequency analysis were used as implant stability parameters. The peak insertion torque values were recorded with OsseoCare machine. The resonance frequency analysis measurements were performed with Osstell instrument immediately after implant placement, 6, and 12 months later. Results Of 300 implants placed, 20 were lost, meaning a survival rate of %. 93.3 after three years (average 3.7 ± 0.7 years). The mean bone density, insertion torque and RFA recordings of all 300 implants were 620 ± 251 HU, 36.1 ± 8 Ncm, and 65.7 ± 9 ISQ at implant placement respectively; which indicated statistically significant correlations between bone density and insertion torque values (p < 0.001), bone density and ISQ values (p < 0.001), and insertion torque and ISQ values (p < 0.001). The mean bone density, insertion torque and RFA values were 645 ± 240 HU, 37.2 ± 7 Ncm, and 67.1 ± 7 ISQ for 280 successful implants at implant placement, while corresponding values were 267 ± 47 HU, 21.8 ± 4 Ncm, and 46.5 ± 4 ISQ for 20 failed implants; which indicated statistically significant differences for each parameter (p < 0.001). Conclusion CT is a useful tool to determine the bone density in the implant recipient sites, and the local bone density has a prevailing influence on primary implant stability, which is an important determinant for implant success.