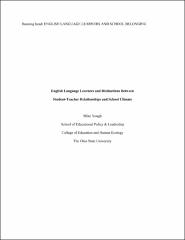 Belongingness is a fundamental human need (Baumeister & Leary, 1995) and students' sense of belonging in school can be a powerful determinant of how well they do in school (Meyer & Turner, 2006). Thus, a strong sense of belonging may be especially important for disadvantaged students (Solomon, Battistich, Kim, &Watson, 1997) or those going through periods of transitions (Wigfield, Lutz, & Wagner, 2005)-both of which characterize many English language learners (ELL) (Larsen, 2004). Two factors believed to contribute to a sense of school belonging are perceptions of school climate and student-teacher relationships. Perception of positive school climate, or atmosphere, is associated with students who attend school, adopt task goals, and are academically engaged, while positive student-teacher relationships are associated with student engagement, participation, student perceptions of motivating instruction, increased academic performance, teacher ratings of increased self-directed behavior, school liking, school- and class-related interest, and higher levels of life satisfaction (Juvonen, 1996). To date, no studies have directly examined the relation between ELLs' sense of school belonging and English language ability. The intent of this study is to better understand the relationships between English proficiency, level of school involvement, and students' sense of school belonging. Methods The data used in this study was came from the Educational Longitudinal Study of 2002 (ELS:2002) public use data file which included 15,430 10th-grade students enrolled in one of the 752 schools (Ingels, Pratt, Wilson, Burns, Currivan, Roger, & Hubbard-Benasz, 2007). The ELS:2002 surveyed 10th-grade students and their parents, as well as the teachers, principals, and librarians at their schools. The intent of the student questionnaire was to obtain information on students' background, school experiences and activities, plans and goals for the future, employment and out-of-school experiences, language background, and psychological orientation toward learning and was administered in a group setting at school. Results and Discussion A series of four hierarchical multiple regression analyses were conducted. Gender, race, and SES were entered as the first step of each model. The second step consisted of the inclusion of variables associated with participation in school activities. The third step consisted of either self-reported English ability (for ELLs only) or whether participants were native speakers of English (for the full sample). The results indicated that Speaking English as a native language was a significant predictor of positive perceptions of school climate. However, the opposite was true in terms of positive perceptions of student-teacher relationships-being a non-native speaker of English predicted positive student-teacher relations. Implications ELLs are over-represented among the economically disadvantaged (Larsen, 2004) and many are going through periods of transition (Yeh & Inose, 2003). Thus, these students may greatly benefit from a strong sense of school belonging. Yet, the results of this study indicate that ELLs' English proficiency is an important predictor of their perceptions of positive school climate. It is imperative that researchers and educators have a better understanding of factors that contribute to a sense of school belonging for these students. This study is a step toward that direction.