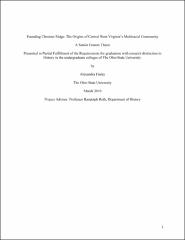 "Founding Chestnut Ridge: the Origins of Central West Virginia's Multiracial Community" describes the formation of an early multiracial community on Virginia's frontier during the late eighteenth century. Today descendants of the group are centered around Philippi, WV, and are known locally as "Chestnut Ridge People" or "West Virginia Guineas." The Chestnut Ridge People have a rich folklore surrounding their forefathers, which today is often taken as historical fact. Using these traditional stories as a starting point, the thesis discusses the nature of racial ambiguity and identity construction in an early American frontier settlement. The lives of four men in particular are examined. Most Chestnut Ridge People today trace their ancestry back to one or more of these individuals. One, Wilmore Male, was an Englishman who lived as husband and wife with his slave, Nancy. Male eventually freed her, but not until she was in her sixties and on the condition that she remain in his household. Another, Henry Dalton, was the son of a white servant woman and an African man who was indentured at birth to a wealthy Maryland family for thirty-one years. Together, their experiences help to illustrate the many paths that led these men to the frontier and the hardships they endured.