Sickle cell trait and priapism: a case report and review of the literature 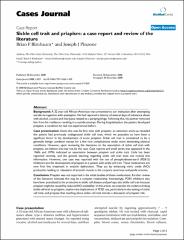 Background A 32 year-old African-American man presented to our institution after attempting suicide via ingestion with quetiapine. He had reported a history of several days of substance abuse with alcohol, cocaine and marijuana related to a partying binge. Following this, his partner removed him from his residence resulting in a suicide attempt. During hospitalization the patient developed priapism, a condition he had not experienced before. Case presentation Given this was his first time with priapism, an extensive work-up revealed the patient had previously undiagnosed sickle cell trait, which we postulate to have been a significant factor in his development of acute priapism. Sickle cell trait is considered to be a generally benign condition except for a few rare complications under more demanding physical conditions. However, upon reviewing the literature on the association of sickle cell trait with priapism, we believe this may not be the case. Case reports and small series that appeared in the 1960s and 1970s indicated an association between priapism and sickle trait. Little has been reported recently, and the general teaching regarding sickle cell trait does not include this information. However, one case was reported with the use of phosphodiesterase-5 (PDE-5) inhibitors and the development of priapism in a patient with sickle cell trait. These medications are now first line treatment in erectile dysfunction. They act by enhancing nitric oxide (NO) production leading to relaxation of smooth muscle in the corpora cavernosa and penile arteries. Conclusion Priapism was not reported in the initial studies of these medications. Further review of the literature indicates this may be a complex relationship. Interestingly, PDE5 inhibitors also have been postulated to be protective in sickle cell disease and perhaps also sickle cell trait because priapism might be caused by reduced NO availability. In this article, we examine the evidence linking sickle cell trait to priapism, explore the implications of PDE5 use, particularly in the setting of sickle cell trait, and propose that teaching about sickle cell trait include a discussion of priapism risk.