Mozart Effect in Musical Fit? A Commentary on Yeoh & North 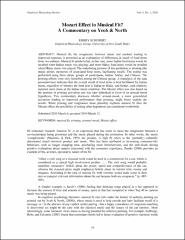 Musical fit, the congruence between music and product leading to improved response, is presented as an explanation of differences in recall of food items from two cultures. Musical fit predicts that, in this case, more Indian food items would be recalled when Indian music was playing, and more Malay food items would be recalled when Malay music was played. The underlining premise of this prediction is priming (the music primes memories of associated food items, facilitating recall). The testing was performed using three ethnic groups of participants, Indian, Malay, and Chinese. The priming effects were only identified among the Chinese group. A reanalysis of the data presented here indicates that the overall recall of food items is best facilitated by Indian music, regardless of whether the food item is Indian or Malay, and further, each ethnicity reported more items in the Indian music condition. The Mozart effect was also based on the premise of priming activation and was later debunked in favor of an arousal-mood hypothesis. This commentary discusses whether arousal-mood, a more generalized activation leading to improved performance than priming, might better explain the results. While priming and congruence more plausibly explains musical fit than the Mozart effect, the possibility of testing other hypotheses are considered worthwhile.