Postmenopausal estrogen and progestin effects on the serum proteome 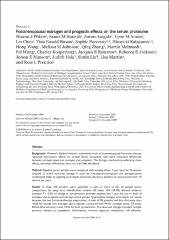 BACKGROUND: Women's Health Initiative randomized trials of postmenopausal hormone therapy reported intervention effects on several clinical outcomes, with some important differences between estrogen alone and estrogen plus progestin. The biologic mechanisms underlying these effects, and these differences, have yet to be fully elucidated. METHODS: Baseline serum samples were compared with samples drawn 1 year later for 50 women assigned to active hormone therapy in both the estrogen-plus-progestin and estrogen-alone randomized trials, by applying an in-depth proteomic discovery platform to serum pools from 10 women per pool. RESULTS: In total, 378 proteins were quantified in two or more of the 10 pooled serum comparisons, by using strict identification criteria. Of these, 169 (44.7%) showed evidence (nominal P < 0.05) of change in concentration between baseline and 1 year for one or both of estrogen-plus-progestin and estrogen-alone groups. Quantitative changes were highly correlated between the two hormone-therapy preparations. A total of 98 proteins had false discovery rates < 0.05 for change with estrogen plus progestin, compared with 94 for estrogen alone. Of these, 84 had false discovery rates <0.05 for both preparations. The observed changes included multiple proteins relevant to coagulation, inflammation, immune response, metabolism, cell adhesion, growth factors, and osteogenesis. Evidence of differential changes also was noted between the hormone preparations, with the strongest evidence in growth factor and inflammation pathways. CONCLUSIONS: Serum proteomic analyses yielded a large number of proteins similarly affected by estrogen plus progestin and by estrogen alone and identified some proteins and pathways that appear to be differentially affected between the two hormone preparations; this may explain their distinct clinical effects.