The Measure of Literacy in Later Medieval England 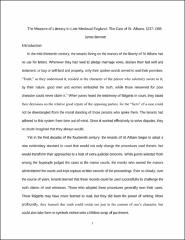 In the mid-thirteenth century, the tenants living on the manors of the liberty of St Albans had no use for letters. Whenever they had need to pledge marriage vows, declare their last will and testament, or buy or sell land and property, only their spoken words served to seal their promises. “Truth,” as they understood it, resided in the character of the person who solemnly swore to it; by their nature, good men and women embodied the truth, while those renowned for poor character could never claim it. When jurors heard the testimony of litigants in court, they based their decisions on the relative good repute of the opposing parties, for the “facts” of a case could not be disentangled from the moral standing of those persons who spoke them. The tenants had adhered to this system from time out of mind. Since it worked effectively to solve disputes, they no doubt imagined that they always would. Yet in the first decades of the fourteenth century, the tenants of St Albans began to adopt a new evidentiary standard in court that would not only change the procedures used therein, but would transform their approaches to a host of extra-judicial concerns. While jurors selected from among the laypeople judged the cases at the manor courts, the monks who owned the manors administered the courts and kept copious written records of the proceedings. Ever so slowly, over the course of years, tenants learned that these records could be used successfully to challenge the truth claims of oral witnesses. Those who adopted these procedures generally won their cases. These litigants may have never learned to read, but they did learn the power of writing. More profoundly, they learned that truth could reside not just in the content of one’s character, but could also take form in symbols etched onto a lifeless scrap of parchment. That realization gave them the confidence and evidence needed to challenge traditional authorities in manners not previously imaginable. In courts of law, men popularly assumed to be of poor character could now disprove the word of their social betters. Women could now successfully challenge the verdicts of the men who served as their jurors. Most flamboyantly, the tenants could now assemble legal evidence to overturn the ancient privileges of their monastic lords. When those cases did not find verdicts in accordance with the evidence, the tenants violently rebelled. The adoption of literate practices did not turn the world of the Liberty of St Albans upside down, but it did make previously stable and explicitly vertical personal and corporate power relationships into far more topsy-turvy structures. The process that undermined those once firm social structures forms the subject of my dissertation and of this presentation.