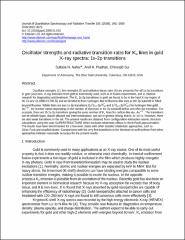 Oscillator strengths (ƒ), line strengths (S) and radiative decay rates (A) are presented for all 1s-2p transitions in gold (Au) ions. X-ray emission from gold is extensively used, such as in fusion experiments, and in medical research for diagnostics and treatment. The Kα 1s-2p transitions in gold are found to be in the hard X-ray region of 66-73 keV (0.1888-0:1706 Å) and are limited to from hydrogen-like to fluorine-like ions as the 2p subshell is filled beyond fluorine. While there are two 1s-2p transitions (1s^2 S_1/2 - 2p^2 P^0_1/2 and 1s^2 S_1/2 - 2p^2 P^0_3/2) for hydrogen-like gold, Au^+78 , the number varies depending on the number of electrons in the 2p subshell before and after the transition. For example, there are 35 1s-2p transitions giving the same number of K_α lines for carbon-like Au, Au^+73 . The transitions can be of both types, dipole allowed and intercombination, and are in general strong, that is, A~10 =s. However, there are also weak transitions in the set. The present results are obtained from configuration interaction atomic structure calculations using the code SUPERSTRUCTURE which includes relativistic effects in Breit-Pauli approximation. The results have been benchmarked for a few ionic states with other detailed relativistic approaches, such as Dirac-Fock and coupled cluster. Comparisons with the very few transitions in the literature as well as those from other approaches indicate reasonable accuracy for the present results.

This work was partially supported by a Large Interdisciplinary Grant award from the Ohio State University. The computational work was carried out on the Cray X1 and Itanium 4 cluster at the Ohio Supercomputer Center in Columbus Ohio. C. Sur acknowledges Dr. Rajat Chaudhuri for helpful discussions and developing codes for relativistic coupled cluster calculations.