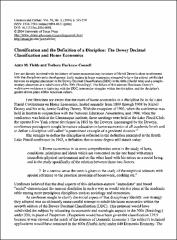 Few not directly involved with the history of home economics may be aware of Melvil Dewey's close involvement with that discipline's early development. Early leaders in home economics attempted to have the subject subdivided between its original placement in the Dewey Decimal Classification (DDC) in the 600s (Useful Arts) and a complementary placement as a subdivision of the 300s (Sociology). The failure of this attempt illuminates Dewey's well-known resistance to tinkering with the DDC, internecine struggles within the discipline, and the discipline's gender-driven place within American culture.