The Cold War in the Third World 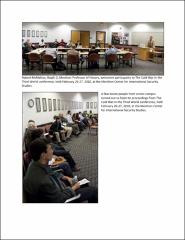 The first generation of Cold War scholarship was overwhelmingly Eurocentric, concentrating on the Soviet-American confrontation in the heart of Europe while paying but cursory attention to non-Western areas. In recent years, that imbalance has been righted as most scholars now recognize that the Cold War was a truly global phenomenon in which the Third World served as a critical theater and in which non-Western actors played a large and substantive role. The emergence of the Third World, together with the bloody, conflict-ridden process of decolonization that brought it forth, not only coincided temporally with the Cold War but was inextricably shaped by that same Cold War. Indeed, the very term Third World emerged directly out of the Cold War struggle between the U.S. and the Soviet Union. One of the central paradoxes of the Cold War is that it ushered in the longest sustained period of peace in modern European history at the very same time that Asia, Africa, and the Middle East were convulsed by unprecedented amounts of violence and conflict. If Europe’s Long Peace can be directly attributable to the structure of stability imposed by the East-West standoff then to what extent did the Cold War encourage, ignite, or exacerbate, whether indirectly or directly, the Third World Conflicts of the Cold War era? This conference will address two distinct but closely interrelated sets of questions. First, how did the Third World affect the course of the Cold War and the behavior and priorities of the two superpowers? And second, what impact did the Cold War have on the developing states and societies of Asia, Africa, the Middle East and Latin America? This conference will bring together leading younger and established scholars from the fields of international, diplomatic, and Third World history to produce an integrative, broadly focused approach to this large and complex subject. The conference will precede, and help shape a book project in which contributors will write an original interpretive essay on various aspects of the Cold War in the Third World in his or her own area of expertise.