It’s The Region, Stupid: The Real Dangers of U.S. Failure in Afghanistan-Pakistan 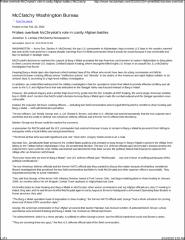 Jonathan Landay is senior national security and intelligence correspondent for McClatchy Newspapers. He is a veteran foreign affairs reporter and has written on U.S. defense, intelligence and foreign policies for nearly 25 years. Landay speaks frequently on national security matters, particularly the Balkans. During his visit to Ohio State, he will speak about Pakistan and the war in Afghanistan. Landay has experience in South Asia, Iraq, the Balkans and Washington. He previously worked for United Press International where he covered the final four years of the Soviet occupation of Afghanistan, the conflicts in Punjab, Kashmir and Sri Lanka, and the 1989 crackdown on pro-democracy demonstrators in Beijing's Tiananmen Square. He also covered the collapse and wars of former Yugoslavia for UPI and later for the Christian Science Monitor. After moving to Washington, D.C. in December 1994 to write on defense and foreign affairs for The Christian Science Monitor, he joined Knight Ridder Newspapers, now McClatchy Newspapers. Landay writes regularly on issues such as the Iranian and North Korean nuclear programs, the U.S. missile defense program, U.S. intelligence matters and U.S. interrogation and detainee policy. He covered the 2001 U.S.-led intervention in Afghanistan, including the Battle of Tora Bora, and in 2003, he spent four months in northern Iraq covering preparations for the U.S.-led invasion and later, the invasion itself. He returns frequently to report in Pakistan and in Afghanistan, where he embeds with U.S. forces. Landay has been nominated three times for a Pulitzer Prize for his investigative work with Warren P. Strobel and Bureau Chief John Walcott on the Bush administration's use of exaggerated and bogus pre-war intelligence on Iraq and the lack of post-invasion stability operations planning. The team won numerous awards including the 2003 Raymond Clapper Memorial Award, the National Headliner Award for How the Bush Administration Went to War in Iraq, a 2005 Award of Distinction from Northwestern University's Medill School of Journalism for Iraqi Exiles Fed Exaggerated Tips to News Media, and a 2007 Edward Weintal Prize from Georgetown University's Institute for the Study of Diplomacy. Their reporting was also showcased in Buying the War, a documentary produced by Bill Moyers for PBS in 2007. Landay earned his B.A. in journalism from George Washington University. He is a keen cyclist and plays lead guitar and writes original music for a local rhythm and blues band called Nobody's Business.