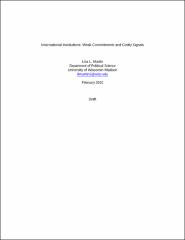 Lisa Martin is professor of political science at the University of Wisconsin-Madison. Her research is primarily focused on the role of institutions and international organizations in world politics. She views institutions through a strategic lens, examining how their functions and design influence state interaction. Topics that she has worked on include economic sanctions and the role of domestic legislatures in international cooperation. Her current research interests include examination of the signaling and commitment properties of international institutions; comparative analysis of the international financial institutions; and the application of political economy models of trade to trade in services. Martin is editor of Global Governance (Ashgate Publishing, 2008) and International Institutions in the New Global Economy (Edward Elgar Publishing, 2005). She is the author of Democratic Commitments: Legislatures and International Cooperation (Princeton University Press, 2000) and Coercive Cooperation: Explaining Multilateral Economic Sanctions (Princeton University Press, 1992). She has also published numerous articles including "The President and International Agreements: Treaties as Signaling Devices" (Presidential Studies Quarterly, 2005); "Institutional Effects on State Behavior: Convergence and Divergence" with Liliana Botcheva (International Studies Quarterly, 2001); and "Legalization, Trade Liberalization, and Domestic Politics: A Cautionary Note" with Judith Goldstein (International Organization, 2000). Martin has received numerous awards, and her research has been supported by the Social Science Research Council, the Whiting Foundation, the MacArthur Foundation, the Guggenheim Memorial Foundation, and the Weatherhead Center for International Affairs. She currently serves as editorial board member of International Interactions and chair of the American Political Science Association publications committee. Martin received her Ph.D. from Harvard University and B.S. with honors from the California Institute of Technology.