Why We Fight? Past and Future Motives for War 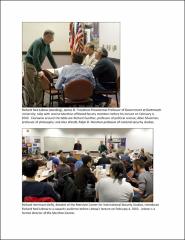 Richard Ned Lebow is James O. Freedman Presidential Professor of Government at Dartmouth College and Centennial Professor of International Relations at the London School of Economics and Political Science. His research interests include international relations theory, conflict management, psychological models of learning, philosophy of social science, conflict prevention, regional conflict, bargaining and negotiation, and methodologies including case studies, psychological experiments, and scenario generation. His most recent books are A Cultural Theory of International Relations (Cambridge, 2008) and The Tragic Vision of Politics: Ethics, Interests and Orders (Cambridge, 2003). The former won the Jervis-Schroeder Award for the best book in international relations and the latter the Alexander L. George Award for the best book in political psychology. Forbidden Fruit: Counterfactuals and International Relations is forthcoming this winter from Princeton University Press. Lebow has taught political science at The City College of New York, Cornell University, and The Johns Hopkins Graduate School of International Affairs in Bologna, Italy, and public policy at the University of Pittsburgh's Graduate School of Public and International Affairs. He was also a professor of political science, history, and psychology at The Ohio State University and served as director of the Mershon Center. Lebow is the former President of the International Society of Political Psychology, Onassis Foundation Fellow in Ancient Greek History and Culture (2006-2007), and Overseas Fellow at St. Johns College, University of Cambridge (2007-2008).