State Failure and Regional Containment: The Case of Afghanistan 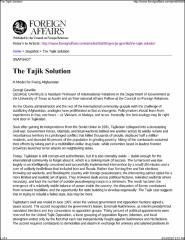 George Gavrilis is assistant professor of government at the University of Texas at Austin and an International Affairs Fellow with the Council on Foreign Relations. He has previously held the positions of Director of Research for the Council on Foreign Relations Oral History Project (Columbia University), Associate Research Fellow at the Institute for Social and Economic Research and Policy (Columbia University), and National Security Postdoctoral Fellow at the Olin Institute for Strategic Studies (Harvard University). During his lecture on "State Failure and Regional Containment: The Case of Afghanistan" Gavrilis will explore the strategic role that states play towards the recovery of a failed neighbor. The talk is based on the author’s recent work in the field and with international organizations. It will focus on the case of Afghanistan as a way to explore broader hypotheses on state failure and regional containment. Gavrilis's research and teaching interests include border management, judicial politics, strategies of conflict, and state failure and international cooperation. His field experience includes the Middle East, Central Asia, and Europe. Gavrilis's first book, The Dynamics of Interstate Boundaries (Cambridge University Press, 2008), explains why some borders deter insurgents, smugglers, bandits and militants while most suffer from infiltration and crisis. He has also published articles in Foreign Affairs and The Washington Quarterly. Gavrilis has received research awards and fellowships from the Social Science Research Council, the Institute for Social & Economic Research and Policy, the American Research Institute in Turkey, the Institute for Turkish Studies, the University of Texas at Austin and Columbia University. He received his Ph.D. with distinction in political science from Columbia University. He graduated with honors in the joint B.A./M.A. program in the Committee on International Relations at the University of Chicago. He is fluent in seven languages including Greek, Turkish, Ottoman Turkish, Uzbek, French, Spanish, and English.