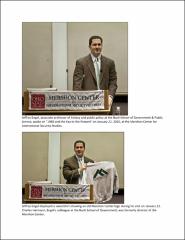 Jeffrey Engel is associate professor of history and public policy at the Bush School of Government & Public Service. He is also the Evelyn and Ed F. Kruse Faculty Fellow and Director of Programming for the Scowcroft Institute of International Affairs. Engel teaches courses in American foreign policy and the evolution of international strategy, with primary research interests including diplomacy's domestic and localized effects, technology and foreign policy, and economic warfare. He is author of Cold War at 30,000 Feet: The Anglo-American Fight for Aviation Supremacy. Published by Harvard University Press in 2007, this book won the 2008 Paul Birdsall Award from the American Historical Association for the most important work on European military or strategic history since 1870. Engel also serves on the editorial board for Diplomatic History and the Journal of Transatlantic Studies. His next project, Seeking Monsters to Destroy: Language and War from Thomas Jefferson to George W. Bush (Oxford University Press, forthcoming) is a history of the personification effect, addressing how the American tendency to personify international conflicts alters policy options. Engel holds a Ph.D. in American history from the University of Wisconsin-Madison, graduated from Cornell University (magna cum laude), and has studied at St. Catherine's College, Oxford University. Before coming to the Bush School, he was a lecturer in history and international relations at the University of Pennsylvania (2003-2004), a visiting assistant professor at Haverford College (2004), and an Olin Postdoctoral Fellow in international security studies at Yale University (2001-2003).