Causal Mechanisms and the (Transnational) Dynamics of Civil War 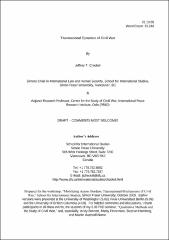