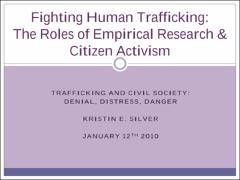 The U.S. Department of State estimates that 600,000 to 800,000 people are trafficked across international borders each year. Of these, 80 percent are women and children, most of whom are trafficked for the purpose of sexual exploitation. Also known as trafficking in persons, human trafficking comprises the fastest growing criminal industry in the world, based on the recruitment, harboring, and transportation of people solely for the purpose of exploitation. Every year traffickers generate billions of dollars in profits at the expense of victimizing millions of people around the world. Despite this staggering reality, governments around the world are only beginning to address the problem. In most countries, traffickers operate with almost total impunity even in the most severe cases. A lack of awareness in the public exacerbates inaction on the part of authorities. The Mershon Center and the Center for Slavic and East European Studies Panel on Human Trafficking is an interdisciplinary discussion of the realities of human trafficking and analysis of how NGO networks, government officials, and civil society as a whole can effectively work together to address and combat human trafficking. Panelists include Ohio State experts Yana Hashamova, director of the Center for Slavic and East European Studies, Marguerite Hernandez, graduate student in sociology, and Kristin Silver, undergraduate major in psychology. This panel features Ambassador Mark P. Lagon, Executive Director and CEO of Polaris Project, a leading anti-human trafficking nonprofit organization running the primary national hotline, the National Human Trafficking Resource Center. Previously Lagon was Ambassador-at-Large and Director of the Office to Monitor and Combat Trafficking in Persons (TIP). In this capacity, he was chair of the Senior Policy Operating Group coordinating U.S. agencies domestic and global anti-trafficking policy. As part of the panel, Ambassador Lagon will give a presentation about "The Crucial Role of Civil Society in Fighting Human Trafficking: As Much in America as the World." Lagon is the author of The Reagan Doctrine: Sources of American Conduct in the Cold War’s Last Chapter (Praeger, 1994). He received his Ph.D. from Georgetown University and his B.A. from Harvard University in Government.

Streaming video requires Windows Media Player to view.
The University Archives has determined that this item is of continuing value to OSU's history.