West Africa and the U.S. 'War on Terror' 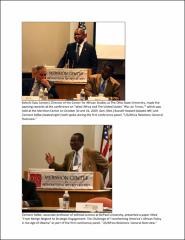 Since September 11, heightened security attention has focused on West Africa. The vast geographical expanse of the Sahel, with its relatively small governmental infrastructure, makes the region an appealing base for terrorist groups. One example is the oil-producing Niger-Delta zone of Nigeria. This area continues to show increasing vulnerability as a failed state, making it a target location to organize and train Islamic militants. To address such issues, the United States launched a $500 million Trans-Sahara Counterterrorism Initiative, which seeks to boost the military capacity of selected West African nations and counter the security threats posed by terrorists. The establishment of the U.S. military's Africa Command (AFRICOM) in 2007 marks the growing importance of Africa in U.S. security calculations. According to U.S. Defense Secretary Robert Gates, AFRICOM oversees "security cooperation, partnership capability building, defense support to non-military missions, and, if directed, military operations on the African continent." Although these new developments represent a dramatic departure from past U.S. policy toward Africa, systematic scholarly efforts to understand these radical transformations are lacking. This conference seeks to provide a comprehensive study of the evolving U.S.-Africa security partnership.