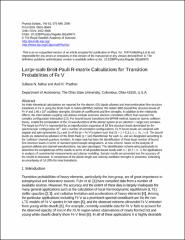 Ab initio theoretical calculations are reported for the electric (El) dipole allowed and intercombination fine structure transitions in Fe V using the Breit-Pauli R-matrix (BPRM) method. We obtain 3865 bound fine structure levels of Fe V and 1.46 x 10^6 oscillator strengths, Einstein A-coefficients and line strengths. In addition to the relativistic effects, the intermediate coupling calculations include extensive electron correlation effects that represent the complex configuration interaction (CI). For bound-bound transitions the BPRM method, based on atomic collision theory, entails the computation of the CI wavefunctions of the atomic system as an (electron + target ion) complex. The target ion FeVI is represented by an eigenfunction expansion of 19 fine structure levels dominated by the spectroscopic configuration 3d^3, and a number of correlation configurations. Fe V bound levels are obtained with angular and spin symmetries SLπ and Jπ of the (e + Fe VI) system such that 2S + 1 = 5,3,1, L ≤ 10, J ≤ 8. The bound levels are obtained as solutions of the Breit-Pauli (e + ion) Hamiltonian for each Jπ, and are designated according to the 'collision' channel quantum numbers. A major task has been the identification of these large number of bound fine structure levels in terms of standard spectroscopic designations. A new scheme, based on the analysis of quantum defects and channel wavefunctions, has been developed. The identification scheme aims particularly to determine the completeness of the results in terms of all possible bound levels with n ≤ 10, l ≤ n - 1, for applications to analysis of experimental measurements and plasma modeling. Sample results are presented and the accuracy of the results is discussed. A comparison of the dipole length and velocity oscillator strengths is presented, indicating an uncertainty of 10-20% for most transitions.

This work was supported partially by the U.S. National Science Foundation (AST-9870089) and the NASA (NAG5-7903). The computational work was carried out at the Ohio Supercomputer Center in Columbus Ohio.

© The Royal Swedish Academy of Sciences